Don't Leave It Up To Chance 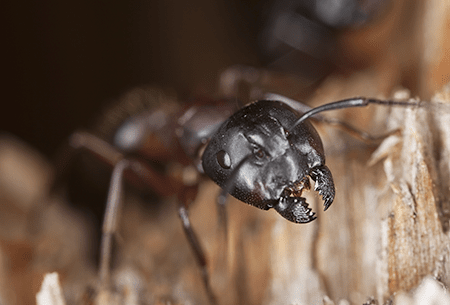 Have you ever heard the saying, "Don't leave it up to chance, when it comes to all those ants?" No? Well, that's probably because we just made it up. The fact is most people don't pay too much attention to ants when they come to visit. If they are outside, they aren't much of an issue. If they are inside--well--a few little ants can't do any harm, right? Not necessarily. Let's take a look at the common ants in our area and see if there is really any harm in keeping them around.

Pharaoh ant workers (also known as sugar ants) are only around 1.5 mm in length, which makes them one of the smallest types of ants you will see inside your home. They are yellowish to orangish and their abdomens are capped with a darker brown color. Pharaoh ants have two nodes between the thorax and abdomen.

Mostly found in hospitals, these ants are polygynous, which means that each colony has many queens. This allows a single colony to separate, easily, into additional colonies. For this reason, pharaoh ants are known to be one of the most difficult types of ants to eradicate. That's a big problem, considering they cause the following issues:

These ants are dark brown to black and have a beehive-shaped abdomen. They have 1 flat, hidden node between the thorax and abdomen and workers grow to be around 3 mm long. When squished, these annoying little ants emit a bad odor that some describe as smelling like rotten coconuts. They can also cause contamination of foods as well as other issues, especially if they invade in large numbers.

Odorous house ants seem to be an increasing pest problem. In nature, the colonies tend to be very small with 1 queen and perhaps 100 ants. But in more populated areas, there can be many nests connected by trails with thousands of queens in just one colony, and probably millions of workers. In fact, there have been reports of colonies as large as a whole city block or more. And what used to be a warm-weather ant problem is becoming more of a year-round concern for home and business owners.

Carpenter ants are large black ants which measure around 13 mm long on average. They have a single, pointed node between the thorax and abdomen. Carpenter ants do not build or fix anything, but rather, they excavate wood and cause damage to wooden structures. In order to build nests, carpenter ants carve out tunnels and galleries inside the wood of a structure. Inside those nests, more ants are created and, thus, more tunnels and galleries are needed. If a carpenter ant infestation is allowed to grow, unchecked, it can create costly damage. Not only do these ants cause damage directly, they can be an indication of water damage in your home since they prefer to infest wood that is softened or rotting. Carpenter ants cost United States home and business owners hundreds of millions of dollars annually.

If you are seeing lots of ants around your home or, worse, inside your home, it is time to sign up for a year-round pest control program. The professionals at Montgomery Exterminating take ant infestations seriously. Get started with a FREE estimate today. Life is simply better without worrying about ants spreading illness, destroying property, or causing a stink in your home.