Home › Blog › Are Roly-Polies Rolling Around Your Tulsa Garden?

Are Roly-Polies Rolling Around Your Tulsa Garden? 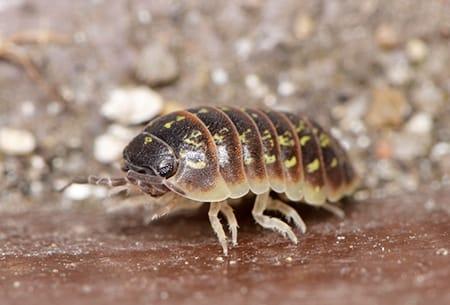 A roly-poly sounds like a cute, cuddly little pet. You may know them by their more formal name—pill bug, but they are anything but cute and cuddly. These pests have the look of a beetle but are actually a land-living crustacean. Most of the time you’ll find roly-polies outside in your Tulsa yard or garden, but they do occasionally make their way indoors. While they are relatively harmless, they can attract other undesirable pests to your yard. Learn what steps you can take to protect your Tulsa garden from pill bugs

Pill bugs are brown to grey and have segmented shell-like bodies. They can bend at their seven separate plate sections, rolling themselves into a ball, and do this for protection from predators. When they are rolled up, they can look as small as a pill, and only grow to a bit over a ¼ inch. Pill bugs have 14 legs and 4 antennae.

What is the Life Cycle of a Roly-Poly?

Depending on how successful they are at avoiding predators, pill bugs can live for two to five years. They have from 100 to 200 eggs at a time and can have a brood up to three times a year. For the first couple of weeks, the hatched babies live in their mother's pouch. Once, they emerge they begin several stages of molting, eventually developing into full-grown pill bugs.

Pill bugs aren’t harmful to humans in that they don’t bite or spread disease. They can do damage to your Tulsa area yard and garden though, and feed off decaying foliage and plant material. They have been known to eat garden plants like tomatoes, peas, and beans, particularly the seedlings and roots, causing a garden to fail.

How to Avoid Roly-Polies?

Keeping your yard free of decaying organic material is one of the best ways to reduce pill bugs. If they don’t have a cozy place to live with a good food source, they won’t set up residence on your Tulsa property. Keeping your soil dry and slightly acidic can help as well because they prefer damp neutral soil.

For advice and effective pest control for pill bugs or other pests, contact the professionals at Montgomery Exterminating. We are happy to help you with a pest control plan that is best for your Tulsa home.