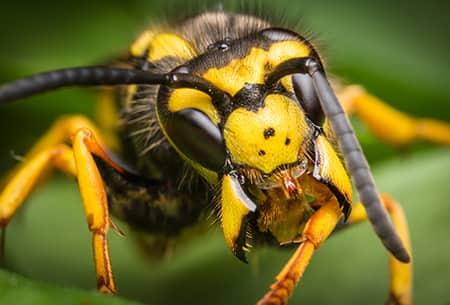 Yellow jackets have black and yellow bands around their bodies, as well as a black and yellow face. They’re typically around a half inch in length. The body of a yellow jacket is segmented with a pinched waist. They have long wings and their legs hang down as they fly. These stinging insects are very social. They’re also very territorial.

Cicada killers are a very large species of wasp. They reach 2 to 3 inches in length! Their body color ranges from black to rusty-red with yellow and black bands. The wings of a cicada killer are tinted yellow and heavily veined. Their name makes them sound more ferocious than they are. Cicada killers are far less likely to sting humans. Unlike yellow jackets, they are a solitary species. They get their name from killing cicada bugs to feed to their larvae.

Despite the difference between these two stinging insects, they can both cause a big problem. Stinging insects are a huge nuisance around the house, especially if you spend a lot of time outside. Both yellow jackets and cicada killers burrow and nest in the ground. Lawns and sandy areas are an attractive place to build a nest. This could be around the children’s swing set, the grill, the sidewalk, and other inconvenient locations. Stepping on a cicada killer’s nest as your carrying a plate of wings to the grill is not a good way to start the barbecue. Yellow jackets can also nest high up. Their nests aren’t limited to the ground. You may see them in trees, under the porch, along the siding, in eaves, etc.

All wasps defend their nest! It’s important to remember that. Just because cicada killers are less aggressive than yellow jackets doesn’t mean you are safe and will never be stung. All stinging insects are capable of stinging humans. And their bite hurts! The sting from yellow jackets and cicada killers will be painful, red, and probably swollen. Severe allergic reactions can occur from a sting from any stinging insect as well. If you show symptoms, seek medical attention right away.

The population of stinging insects will be the highest in late summer and early fall. During the spring and early summer, these numbers will be building. It’s best to eliminate stinging insects from your property before the population reaches its peak. The more stinging insects, the more chances of being stung. Cicada killers are usually attracted to a property if it looks appealing to build their nest. Yellow jackets may enter a property for the same reason, however, they are also attracted to sweet smells and will happily join a backyard barbecue or hover over the trash. It can be helpful to cover food and keep tight-fitting lids on trash cans. If you notice stinging insects on your property or spot a nest, we highly recommend finding a pest control service in your area. It can be dangerous removing a nest on your own.

Montgomery Exterminating can safely remove the nests of stinging insects in your yard. With our home pest control, we can ensure that stinging insects won’t return to your property. We want you to be able to walk outside without being chased around by yellow jackets. Contact us today to learn more about our programs.