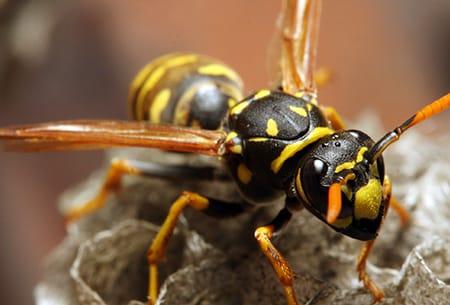 Yellow jackets are widely known for their aggressive nature and large nests. Learning how to identify these wasps from other stinging insects is helpful when it comes to avoiding their painful stings.

How to Identify Yellow Jackets

Yellow jackets are commonly confused for paper wasps or honey bees, although there are a few traits that set them apart from other stinging insects. These wasps have a yellow and black striped pattern, thin waists, and hairless bodies. Yellow jackets also have a rapid side to side flight pattern, which distinguishes them from other types of wasps.

How to Identify Yellow Jacket Nests

Yellow jacket nests are often described as gray, paper-like masses. They build these nests from wood fiber that they chew into a pulp. Depending on what species of yellow jacket is on your property, you may find nests in tree branches or underground.

There are ten different species of yellow jackets, each belonging in one of two geniuses: Vespula or Dolichovespula. The genus Vespula includes seven species, all of which build concealed nests underground or partially underground. Yellow jackets in the Dolichovespula genus, of which there are three species, build aerial nests above ground, often in low branches, shrubs, or in the eaves of Tulsa buildings.

All yellow jacket species defend their nests aggressively. During the fall, this aggression becomes more intense because the workers are busy collecting food for the next generation of queens. These inseminated queens hibernate for the winter, while the rest of their colony perishes in the colder weather. The only exception to this is Southern yellow jackets, which create much larger perennial nests capable of withstanding winter.

Unlike bees, which are only able to sting once before dying, all female yellow jackets are capable of stinging multiple times without harming themselves.Yellow jackets have small, barbed stingers, which do occasionally become lodged in the skin and pull free of the wasp’s body. While yellow jacket species are aggressive, their venom is only dangerous if you are stung too many times or to individuals with allergic reactions to the venom.

To avoid getting stung, your first course of action should be to remove factors that might attract yellow jackets to your Tulsa property.

When it comes to removing stinging insect nests from your Tulsa residential property, it’s never a good idea to do this without professional help. Here at Montgomery Exterminating, we offer effective yellow jacket treatment services to eliminate your wasp problems once and for all.

Give our licensed pest professionals a call today to learn more about our residential pest control plans!