Home › Blog › Keeping Your Distance From Scorpions In Tulsa

Keeping Your Distance From Scorpions In Tulsa 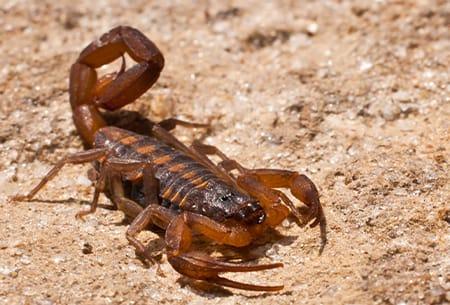 There are several species of scorpions in Oklahoma. While the species found here in Tulsa aren’t considered dangerously poisonous, you do want to avoid them. Their sting can cause some adverse effects that may require anything from basic first aid to professional medical care. As a Tulsa homeowner, there are things you can do to help deter scorpions from making your home their own.

Scorpions are easy to recognize with their front claws with pincers and curved tail. The end of the segmented tail has a small bulb and stinger. Their bodies are slender with four pairs of legs in addition to the pincers used for holding down prey. They can range from just a couple up to several inches long and range in color from light tan to reddish-brown. While they have many pairs of eyes, scorpions have poor vision and must rely on their other senses to catch prey. It takes almost a full year for scorpions to develop into mature adults, and they can live for about three to five years.

While there are approximately three to five species of scorpions in Oklahoma, the most common, in the Tulsa area, is the Bark Scorpion. This type of scorpion is smaller and flatter than most and is the only species known to turn its tail to lay flat while it hides in small cracks and crevices.

Scorpions are nocturnal, so you won’t often encounter them during the day unless you disturb them. Outdoors they hide under trees, rocks, bark, and leaves. If they enter your house, it's either in search of prey or because they were seeking shelter, usually because their hiding place was disturbed. Inside homes, scorpions will hide in dark locations like basements and crawl spaces or around damp areas like pipes and air conditioning units.

While the scorpions around Tulsa don’t have a poisonous sting, it can still be painful and troublesome to certain individuals. Scorpions don’t attack humans but will sting in self-defense, like if you stick your hand in a woodpile or your foot in a shoe where one is hiding.

If you are stung by a scorpion, it’s a good idea to wash the area with soap and water. You may want to ice it and take some over-the-counter pain relievers for the pain and swelling. If symptoms seem severe or unbearable, it’s a good idea to get the advice of a physician. Also, if a small child or someone in poor health is stung, they should get medical attention right away to avoid any complications.

Keeping scorpions out of your home with simple deterrents is something that Tulsa homeowners can try. Sealing cracks, using vents on openings, installing door sweeps, and keeping firewood outside until needed are all ways to reduce the risk of scorpions entering the house. If you are having a continuous problem with scorpions or need advice on how to keep them out of your home, you can contact us at Montgomery Exterminating today. We will be happy to help.