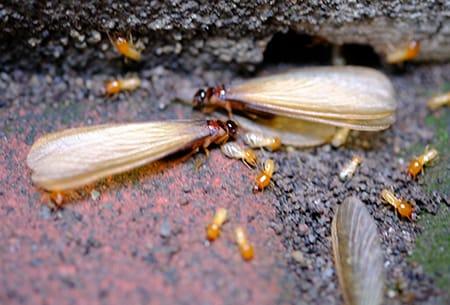 Would you recognize a termite if you saw one? If not, it might not be a big deal. We're not saying that it isn't a big deal to detect termites. Termites cost U.S. property owners over five billion dollars annually. Termites are a serious problem. What we're saying is that it may not be a big deal if you don't know what a termite looks like because you're not going to see most termites. The most destructive type of termites in the United States are subterranean termites and these termites stay hidden from view. There is one exception and it could be the warning sign you need to protect your Tulsa home. Unfortunately, it is rarely seen as well. Here's what you should know about termites in Tulsa.

There are several castes in a termite colony. Each caste has a role to play.

Worker Termites — Workers are the most abundant termites in a colony but, as abundant as they are, there can be millions in your home and you may never know it. Worker termites have a strong aversion to light and dry conditions. This motivates them to stay hidden inside the wood they are feeding on. A home can be totaled by termite workers and appear completely sound. Workers may sometimes be seen when a home is renovated. The breaking of wood and the digging of holes outside can uncover workers. They may also be seen when a tree is taken down or when a stump is split.

Soldier Termites — If you ever open a wall up or dig into the soil near your home and find worker termites, you are going to find soldiers in there with them. The job of soldier termites is to protect the workers. They do this by pinching their enemy with their black pincers or by plugging holes in tunnel walls with their big heads. Since they stay close to worker termites, they are also rarely seen.

Queen Termites — In the heart of the colony is the queen. Her job is to make babies. Some termite queens can produce more than a million babies in a lifetime. You aren't likely to ever see a termite queen because she will be in the heart of her colony deep in the ground outside.

King Termites — By the queen's side, you will find the king termite. Like his queen, he will be in the heart of the colony somewhere deep under the ground.

Swarmers — This is the only caste of termite you're likely to ever see. Swarmers are future kings and queens. They are produced in a mature termite nest and sent out to establish new nests. They do not have an aversion to the light and they can tolerate conditions that are dry. When swarmers come out of a mature nest underneath a man-made structure, they can enter into the structure by accident and create a very noticeable warning sign. If you see swarmers in your Tulsa home, you should know that it is a sign of a current and mature infestation, not an impending infestation. If you notice swarmers on the outside of your home, you should know that the nest they came from is likely to be nearby. Swarmers don't travel very far. As for being "easily seen," there is one more problem with swarmers. They don't swarm for more than 30 minutes. If they don't come out on the inside of your home, you may never see them. A swarm can come and go in the time it takes you to run to the store and back.

Since you rarely see termites and termite warning signs can be very subtle, we strongly recommend ongoing, proactive termite detection and control from a licensed termite control provider. If you live in Tulsa and you need assistance with this, we can help. Montgomery Exterminating offers industry-leading termite control in the Greater Tulsa area. We can help you protect your equity from these sneaky and destructive pests.