Home › Blog › What Every Homeowner Needs To Know About Scorpions

What Every Homeowner Needs To Know About Scorpions 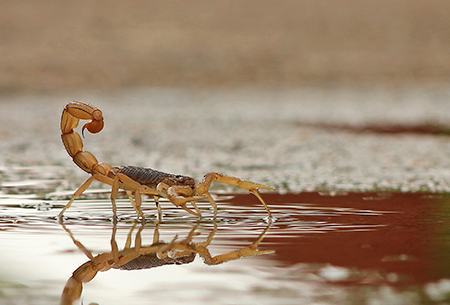 The thought of getting stung by a scorpion might bring up a sense of panic or impending doom. While the sting of a scorpion can pack a powerful punch, most of the time, it is not harmful. However, we are sure scorpions are not something you’d like to encounter in your Tulsa, OK home. Read on to see how to easily identify scorpions, be aware of the problems they can pose, and learn how to prevent and get rid of them.

Many people could identify a scorpion from seeing one on a TV show or in a school book, their pincer claws and curved up tail are dead giveaways to their identity. For those less familiar, scorpions can range in size from two to four inches and are usually brownish yellow to tan in color. They have eight legs with the front two being claws that are used to hold down their prey. Their tail is long and segmented and has a stinger at the end.

Scorpions sting when they are threatened. Their sting can be very painful, often compared to a severe bee sting, and leaves a red welt behind. For some people that may be the end of it. For others, particularly children or the elderly, the venom can cause more severe symptoms such as difficulty breathing, vomiting, sweating, odd neck movements, and an accelerated heart rate. In rare cases, people can have a severe allergic reaction to a scorpion sting called anaphylaxis. Because you don’t know how you might react to a scorpion sting, anyone who is stung should seek medical attention and an evaluation.

There are only a few things you can do to try to prevent scorpions from invading your Tulsa area property and home. One is to rid your yard of any organic debris that scorpions might like to live under such as damp leaves, grass clippings, fallen tree limbs or old logs. Another is to seal up any cracks and holes in your home. When scorpions want to seek refuge from extreme temperatures they may try to come inside. Scorpions are hearty beings though and can go months without food. You shouldn’t try to catch or trap or squish them on your own as you risk getting stung.

The best way to rid your home of scorpions is to have a pest control plan in place from the experts at Montgomery Exterminators. A technician can come to your home and inspect the property to identify issues. They will come up with a plan to help you control and rid your home of scorpions. Year-round pest control plans are available and help you take the worry out of thinking about scorpions stinging you and your family.