Problems Moles Cause In Oklahoma 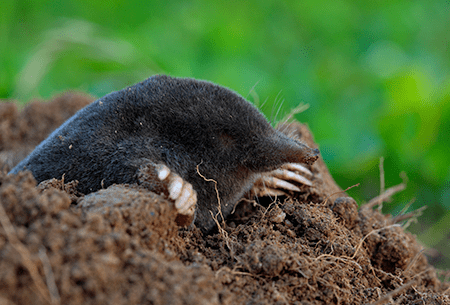 If you are watching as your landscape is slowly, or maybe not-so-slowly, being destroyed by tunneling moles, you are probably searching for strategies on how to get rid of those moles so you can save your property. In this article, we will focus on some of the tactics people have taken that are not very effective at stopping moles--and one strategy that is sure to work.

These small mammals are often considered pests because of their digging habits in gardens and lawns. They have cylindrical-shaped bodies, short necks, and elongated heads. Their limbs are short and powerful, with front feet that are much larger than their hind feet. A typical mole weighs around 4 ounces and measures approximately 6 inches long. These little animals are characterized by hairless snouts, tiny eyes, and no visible ears.

Moles usually inhabit grasslands, urban areas, gardens, sand dunes, woodlands and other areas where there is soil to tunnel through. Tunnels dug by moles are often used by several generations of moles and serve more than one purpose. They are used as routes to get from one area to another, and they provide living spaces. These living spaces are usually created at the end of a tunnel and are hollowed out areas. They are used for bedrooms, living chambers, and food-storage chambers.

Why Moles Are A Problem For Home And Business Owners

How Montgomery Exterminating Can Help

By partnering with Montgomery Exterminating, you can be free of lawn-destroying moles for good. First, a thorough inspection will be performed by one of our specially trained pest control professionals, and a plan of action will be developed. Second, we will remove all moles using methods developed by industry experts. Finally, after the initial problem has been effectively taken care of, if you choose monthly service, we will return each month to make sure that your property continues to be free of mole activity. You do not have to keep spending time, energy, and money repairing your property because of this preventable problem. Reach out to us today for professional mole control in Tulsa and throughout our Oklahoma service area.